Do you have relatives who lived in New York City in 1940? Would you like to flesh out your picture of them beyond birth/marriage/death dates? If so, you might want to have a look at New York City tax photos.

In the late 1930s, the City took a photo of every building in each of the five boroughs (for tax purposes, of course). Those photos have been digitized and are available online. They’re not the best of photos but it can be very easy to find the one you want.

You begin with the 1940 US Census, available at both Ancestry and FamilySearch. Find your relatives and make a note of the street name, house number and borough. You might also want to note if they were at the same address in 1935 (that oddball question appearing in this census only). As an example, the census says my grandparents and some of their children were living at 1922 Hobart Ave in the Bronx in 1940, and were at the same address in 1935.

If you’ve been doing family history a while you’ve probably heard of One-Step Web Pages by Stephen P. Morse. These contain various widgets to simplify genealogical searches. There’s a new one for finding these tax photos. It’s at https://stevemorse.org/vital/nyctaxphotos.html

Go there, enter the street name, house number, and borough, and click the “Display Photos” button. If all goes well this gives you a page with a link to images the at the NYC Records website. Here’s what 1922 Hobart Ave looked like in the late 1930s: 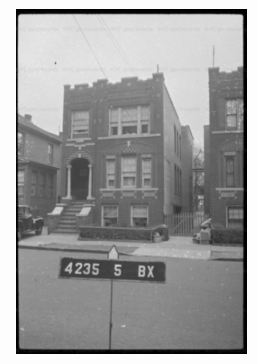 A later record for this building says it was built in 1927, and the census says my grandparents were living there in 1935, when the building was only eight years old. That’s newer than my Sun City home is now. I never thought of my grandparents as living in a “new home.” No wonder they moved to the Bronx from Manhattan!

Additional background on the tax photos is available at:

The above steps worked fine for me. But if I’ve made a mistake writing them up, or they don’t work for you, or you’d like to have a little workshop some Saturday morning, please reply to this post and I’ll get back to you.

This entry was posted in SCVGS. Bookmark the permalink.